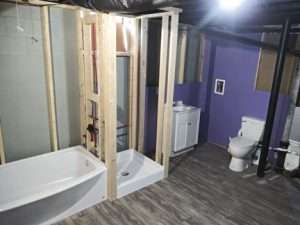 Homeowners in Lesslie, South Carolina, wanted to convert their 1,300-square-foot unfinished basement into a comfortable living space. They enlisted the help of Zachary Clark, who started out as an odds-and-ends handyman and now owns a one-man professional design, remodeling and repair business: Clark Home Solutions in York, South Carolina.

For this particular job, Clark wanted to find a plumbing solution that would allow him to tear up the least amount of concrete possible for the creation of a basement bathroom.

“I was investigating different things online, just looking for different options on how other people hooked up their basement plumbing,” says Clark. “The Sanibest Pro came up on Google, and I decided to investigate it further.”

Clark and his customers felt that the Sanibest Pro toilet and the overall system looked attractive and — just as important — would be easy to install.

Clark was also thrilled that he was able to purchase the entire system online. “I bought the toilet, the water alarm and the pump online and had it delivered to the home,” says Clark.

By using the Sanibest Pro grinding system, Clark was able to install a toilet and a vanity without breaking through the concrete floor to accommodate conventional, below-fixture drainage.

The Sanibest Pro is a 1-horsepower pump system used to install a complete bathroom up to 25 feet below the sewer line, or even up to 150 feet away from a soil stack. The Sanibest Pro is designed to handle larger and more problematic sanitary products that have been flushed down the toilet, such as condoms, sanitary napkins, Q-tips, dental floss, etc.

Inside the Sanibest Pro there is a pressure chamber, which starts and stops the unit, and the motor, which drives the stainless steel cutting blade and the pump. When the flush is activated, the water flowing into the Sanibest Pro activates a micro switch in the pressure chamber, which in turn starts the motor. The motor is sealed for life in an oil filled enclosure. A common spindle/shaft drives the impeller and the blades. The moving parts, therefore, are kept to an absolute minimum. Water and organic waste matter enter the chamber and are reduced to slurry as the blades rotate at 3600 RPM. The reduced solids are picked up at the bottom and the impeller mounted beneath the motor ejects the waste.

In addition, the Sanibest Pro will also discharge gray water from a variety of other sanitary fixtures such as: a sink, a bath/shower, a urinal and even a washing machine (indirect connection).

For this full-bathroom installation, Clark decided to connect the vanity and toilet to the Sanibest Pro, but not the tub and shower (although it could have handled them as well. More on the latter in a bit.) The home’s septic tank is only 30 to 40 feet away from the toilet. Clark felt “lucky,” because the home’s existing main drain line actually ran straight down to the toilet. This made it easy for Clark to tee the Sanibest Pro’s discharge pipe to the drain line toward the back.

The wastewater from the vanity discharges into the Sanibest Pro via one of its 2-inch inlets.

Clark also installed an emergency shutoff water system on both the hot-water and cold-water lines. The shutoffs allow the homeowners to shut down the entire basement system by turning the two attached valves.

Clark did, however, break through the concrete for the shower and bathtub’s P-trap and drains. That’s because the bathroom layout allowed him to run the two lines straight out of the house and connect them directly to the septic tank.

Breaking through the concrete to install a plumbing system for the toilet and vanity would’ve been a lot harder. “I would’ve had to dig two feet underground just to keep the fixtures at basement level,” says Clark.

According to Clark, breaking through the concrete to install a conventional floor drain for the toilet and the vanity would’ve added three to four more days to the installation and doubled the homeowner’s costs.

“But this Sanibest Pro system eliminated the need for all that hassle and expense, and so far, it has performed great,” says Clark.

Clark says the installation process was straightforward and took him less than eight hours. He says he would use the system again in a similar situation.

“The Sanibest Pro has been absolutely flawless. I love it, the homeowners love it, I haven’t had any callbacks.”

Full view of the basement bathroom in Lesslie, South Carolina. 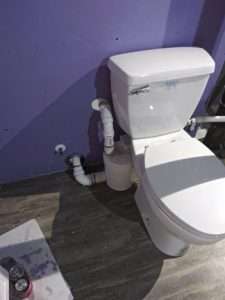 The Sanibest Pro, showing the toilet and vanity connections via two of its three inlets. 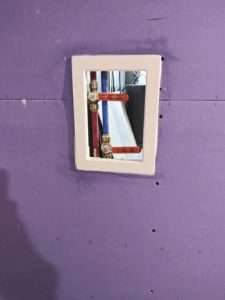 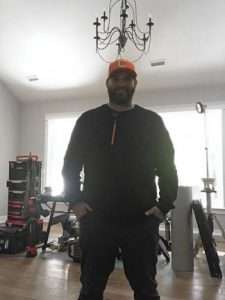