Connecticut contractor chooses Sanishower to meet the critical needs of a father battling lung cancer and in need of an easily accessible, full bathroom. 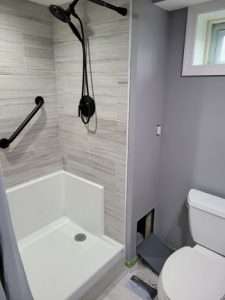 SOUTHINGTON, CONNECTICUT — To Tina, a new homeowner in the Connecticut area, the most attractive selling point of a home she recently visited while house-hunting was a basement that doubled as an in-law suite. With access from the outside, the residence would provide freedom for her elderly parents in the form of their own private living space on that lower level.

The only caveat? The home had four bathrooms total, but the basement facility was only a half bath. Under normal conditions, sharing one of the three full bathrooms presented zero issues; however, life for Tina and her parents took a drastic turn.

Shortly after moving into the home, Tina’s father Bernie suffered a heart attack, sending him to critical care. It was then that doctors discovered he also had a mass on his lung, diagnosing him with lung cancer with a 25% curative rate. With aggressive treatment, Bernie’s easy access to a full shower became an immediate priority.

“The doctor informed me that my father would be in a very weakened condition, so walking up and down the stairs was no longer an option,” explains Tina, who works as a manufacturers representative for a number of plumbing companies. “I needed the quickest, best way to get my parents a fully equipped shower.”

With time of the essence, Tina contacted a local contractor to manage the project. As luck would have it, he had experience installing Saniflo products and was confident this solution would best fit Tina’s needs.

Given her own familiarity with Saniflo products, Tina opted for the Sanishower residential drain pump for medium-duty, gray water applications as the best choice because of its reliability and ease of installation.

“It would take longer to drill the concrete floor and take the conventional route of replumbing the basement to support a shower,” says the contractor, explaining the decision to install the Sanishower pump. “We needed the most efficient, least expensive way to build the shower in this half bathroom, which had only an existing toilet and a vanity sink.”

The Sanishower’s compact size is designed to fit comfortably beneath a shower base. But in this particular installation, the Sanishower lives behind the wall holding the shower head and fixtures. An access door allows Tina to reach the Sanishower easily, should maintenance become necessary.

As water enters the Sanishower enclosure, a micro switch activates the 0.2 HP motor. Sealed in an oil-filled enclosure, the motor discharges the gray water at a rate of up to 20 gallons per minute.

While the Sanishower offers a ¾” discharge connection, in Tina’s installation, gray water is pumped out of the unit through a 1” pipe running 7-feet vertically and 8-feet horizontally. At that end point, the discharge line empties into an existing 2” drain pipe connected to a septic tank in the home’s backyard.

As the discharging gray water level in Sanishower diminishes, the microswitch deactivates until incoming gray water refills the unit again, triggering a new operating cycle. Although this cycle can be as short as two seconds, the unit itself offers very little noise.

“I was pleasantly surprised when our contractor tested the Sanishower for us,” says Tina. “It was so quiet, which is helpful when my dad is resting and my mom uses the shower.”

The Sanishower provides an additional drainage connection to one other sanitary fixture — usually a sink — with a 2” inlet positioned low on either side of the unit. But because the formerly half-bathroom’s toilet and vanity were already connected to conventional drainage, this particular unit handles only the shower.

A vent pipe, connected to the vent outlet at the top of the Sanishower, runs vertically and discharges through the vent in the roof.

The installation of the Sanishower took a total of four hours from start to finish, according to the contractor.

“That was less time than I expected,” exclaims Tina. “The unexpected circumstances we’ve had to endure called for quick action. Thanks to Saniflo’s easy installation, we were able to achieve that.”

With the urgency of the installation and the unquestionable cost savings over conventional drainage, Tina finds peace of mind that she can provide her elderly parents with everything they need within their new living space. Her father can undergo his treatments and come home to find accessibility within easy reach, allowing him to rest and recover comfortably. 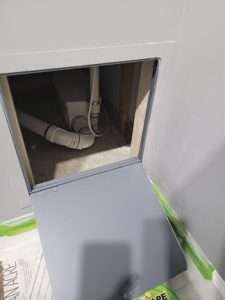 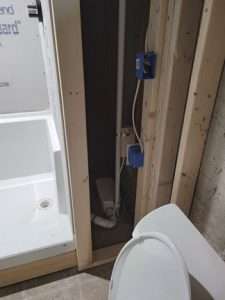 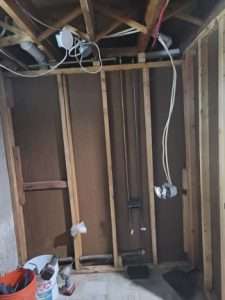 Demo completed before installation of shower and Sanishower. 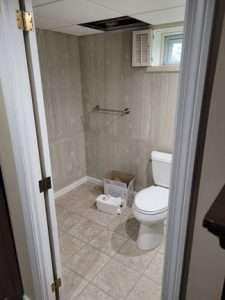 Bathroom before demo and installation. 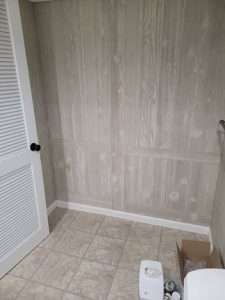 Area of the bathroom before shower was installed.