When adding a living space in a garage to accommodate domestic violence victims, the director of Domestic Violence Assistance quickly learns that Saniflo’s Saniaccess 3 is the “less costly” — but highly effective — approach to creating a full bathroom. 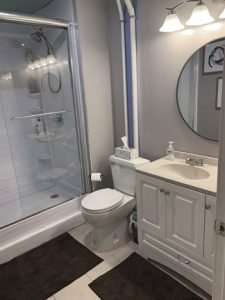 GREENVILLE, SOUTH CAROLINA — The Domestic Violence Assistance is a non-profit organization that collects household items for domestic violence victims and their children. The organization’s director, Sharon Totherow, has made it her life’s mission to assist families once they leave a violent home.

“By doing this, we are ensuring that the victims do not return to the abuser, simply because they don’t have the basic necessities to live in a safe environment,” explains Totherow.

Since starting the non-profit in 2007, Totherow has helped over six hundred victims and more than eight hundred children, thanks to donations from the public and area businesses.

Recently, Totherow undertook a significant project for the organization. It involved converting her garage and den into a living space for one to two families who are victims of domestic violence for when they need immediate shelter. The living space would include a bedroom and full bathroom with a toilet, sink and shower.

However, Totherow quickly realized creating such a space in the garage would require a massive amount of work, including the expensive job of breaking through the concrete floor. “It was too costly for us to break into the cement to install a regular toilet,” she says.

Based on the plumber’s recommendation and conversations with others who had the same system installed in basement/garage areas, Totherow contacted Saniflo to request a donation for her cause.

“Everyone I talked to was more than happy with their choice to install a Saniflo product and would choose it again if needed,” says Totherow. “I honestly didn’t have any negative feedback from anyone on this system, and this was the less costly approach to get the bathroom completely done.”

After receiving a heartfelt letter from Totherow explaining the NGO’s mission, Saniflo happily agreed to donate the Saniaccess 3 to the Domestic Violence Assistance.

Brother’s Plumbing, Air and Electric generously assisted in developing the living space — at no cost as well. The company is owned and operated by trusted and certified professionals serving South Carolina’s upstate. According to licensed plumber Randy Lavoie, VP/Co-Owner of Brother’s Plumbing, Air and Electric, the company frequently donates its time and services to worthy organizations when the opportunity presents itself. In addition to installing the Saniflo unit and the bathroom construction, Lavoie’s electrical department also handled the electrical aspect of the project.

Lavoie has installed Saniflo products on various occasions. “I’ve had no issues with the product, and it has been really easy to work with,” he says.

Lavoie explains that he usually recommends the Saniflo solution for projects involving a basement that has no plumbing. He has also installed a Saniflo unit in an attic. According to Lavoie, Brother’s Plumbing, Air and Electric works with Gateway Supply and the sales representative also advocates for Saniflo’s plumbing systems.

Since there was no plumbing in Totherow’s garage area, Brother’s Plumbing had to install all new plumbing, electrical and air vents.

In addition to toilet waste, the Saniaccess 3 can discharge gray water from two other sanitary fixtures, such as a sink, a bathtub, a shower, or even a urinal. The unit can be positioned up to 15 feet below the sewer line or even up to 150 feet away from a soil stack. For this full-bath installation at Domestic Violence Assistance, the toilet is connected to the Saniaccess 3, while a sink and shower drain into the unit’s 2-inch inlets.

A 1-inch PVC discharge pipe connects to the discharge elbow at the top of the unit. This pipe runs ten feet vertically and less than ten feet horizontally before draining into a 3-inch sewage pipe. The wastewater eventually pumps into a septic tank.

A factory-installed, non-return valve prevents backflow, while the discharge elbow rotates 360° — the better to accommodate any given application. Because all plumbing codes require a vent-system connection, the unit has an integral vent connection on its lid.

Totherow says the Saniaccess 3 installation was done in less time than she expected — under two days, according to Lavoie. “There was no water or electrical supply in the garage, so we had to run a water pipe and electricity over to the unit, which required additional time,” he explains.

Totherow confirms that using a Saniflo product resulted in enormous cost savings for her organization.

“When getting quotes for a regular toilet [below-floor drainage], it was well over $7,000 to drill into the concrete and lay piping to the existing bathroom in another area,” she says. “Thankfully, Brother’s Plumbing has done all the work at no cost for our non-profit, so there have been no labor costs.”

Lavoie explains that if they were to charge Totherow for their services, it would have been tens of thousands of dollars to install traditional plumbing.  “For a non-profit like this, jackhammering concrete and installing a sump pump is not realistic,” he says.

Lavoie adds that Saniflo “gives you lots of options, especially when you’re in a tough spot.”

Now that the space has been renovated, Totherow says its current occupant, a domestic violence victim, has had “absolutely no issues with the Saniflo toilet, nor the sink or shower draining into it.”

The finished bathroom with a toilet, sink and shower. 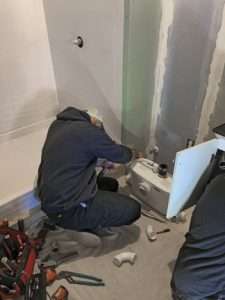 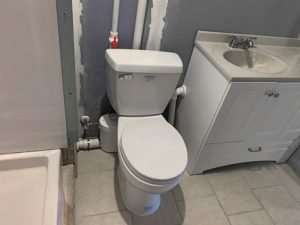 Top Left: Drainage from the three fixtures is jettisoned from the Saniaccess 3 through a 1-inch discharge pipe running ten feet vertically and fewer than ten feet horizontally before draining into a 3-inch sewage pipe. 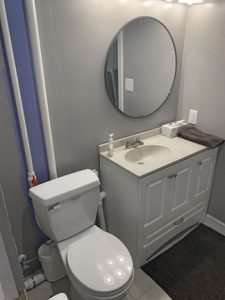 The toilet and vanity showing the Saniaccess 3 located behind the toilet. 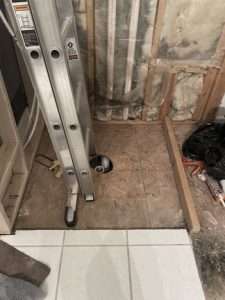 “Before” image of the space where Brother’s Plumbing installed the toilet.